It is hard to believe I first started coaching Cliff Swain almost 35 years when he was 13 years old and I was 15. I had started to work with Jim Winterton who got on the racquetball map when his man child Michael L 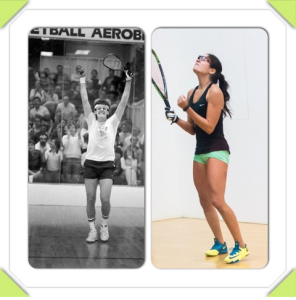 evine , a national junior champion was beating all the top men players when he was only 15. Legend has it that they added those screen serve lines on the court because Levine’s serve was that deadly even with a 250G!

So Jim is still at it coaching all time greats Rhonda Rajsich and Kane Waselenchuk and Cliff Swain ended up becoming arguably one of the best of all time. Time goes by too fast.

What a lot of people may not know is that Cliff is not only one of the greatest players but is also a fantastic teacher of the game and he credits a lot of his success to Dave Peck early on.

Almost 2 years ago I saw Maria Jose Vargas play in the amateur division at the US Open. She had blood coming down her knee and was yelling “vamos” or something like that and hadn’t seen that intensity in a long time and it reminded me of a younger Swain back at the old Playoff Club in Braintree Massachusetts. I didn’t know who she was but was introduced to her by Rafael Filippini after she had just won the World Juniors in LA that year. What started as a fun exhibition at my club with my friends, has turned out to be an incredible journey.

A lot of people may not know this but Cliff Swain got a break when he was younger. Sure he had the talent but he met a sponsor who helped put him in a position to get better instruction from Dave Peck and to make it to tournaments. Cliff could have been a pro hockey player but I remember him telling me he wanted to be the best racquetball player in the world. He could have probably been the best at a lot of things, even Pacman back then. I remember him losing in the C division finals at the Brockton Open and winning the Men’s Open 12 months later. Cliff won his first pro stop at 18 years old in a period where every quarter final back then would be like a final in every IRT event today. You have to remember there were draws with 128 players back then and first place would probably be an inflation adjusted $25,000.

To quote Bo Keely “’ In this 1984 Montreal Open Cliff defeated Lindsey Myers in the finals and Ruben Gonzalez in the semis and Bruce Christensen in the quarters. Lindsay was the only player to score in double digits against Cliff that weekend. He beat Bruce 21-2, 21-1 in the quarters. When asked how he beat him by those scores which nobody did in those days, he said, ‘Christensen served well.’ Ruben who was a top ten pro didn’t score twenty points in the match, and Lindsay Canada’s best managed to play great and lose 21-19, 21-5. No one could believe their eyes or ears, except Scott Hirsch, Cliff’s roommate and practice partner on the Providence College team, who said, ‘It was at that time I realized without a doubt what I already suspected, that I was practicing with the best player in the world. Three months later, Hilecher, Harnett and the rest of the draw were shocked by Cliff winning his first official pro stop in Tulsa, and the next month Hogan and Peck suffered the same fate when Cliff won the Ektelon Nationals. Everyone knows the rest of the story, but Montreal is where it became a matter of when not if Cliff would be #1.”

Before my exhibition with Maria, I asked her what she wanted to accomplish with racquetball and she told me “I want to be the best int he world”. I asked Cliff if he would coach her if I saw potential. He agreed to “pay it forward” and has been an incredible journey so far.

A lot of people don’t realize the 1000’s of hours of training and conditioning it takes to get to the level of being the best. What I have seen in such a short period of time is amazing and it is a testament of what hard work, great coaching, and focus can do. Cliff broke Maria’s game down to the smallest detail and built it back up. He has spent countless number of hours drilling, making her cry, going over video, but the most important part is teaching how to win. There are plenty of athletes that have great strokes, but it is a rare breed that have what I call the “It” factor. I can’t explain it but I know it when I see it.

So this weekend was a great accomplishment seeing Maria Jose Vargaswin here first LPRT event. Two years ago she got whipped early, but this time she came out on top over a tough Rhonda in the finals. But there is still a lot of work to do and no one better to help make this happen better than Cliff.

So congratulations to both of you on a great accomplishment and it has been a pleasure to have worked with you guys and see it happen. Let’s not get too comfortable as there is still a lot of work to do. (Maria’s photo by Ken Fife)