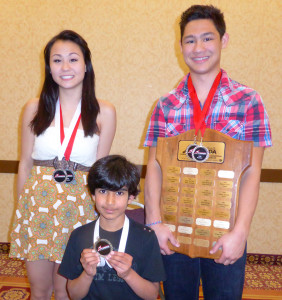 Top ranked Coby Iwaasa repeated his U18 Singles win for a 3rd consecutive year.  He faced Nicolas Bousquet from Montreal in the finals and won in an exciting tie breaker match:  15-8, 11-15, 11-9    Coby’s victory was amazing as he had just returned from Santa Cruz, Bolivia after sustaining injuries to his leg and back when the glass court door shattered in a match he was playing in.

Alexis Iwaasa won the U14 Girls Singles National Junior Title over Annie Fisher from Ontario despite a slow start in her first game but roared back in a decisive 2nd game:  16-14, 15-0      Alexis also teamed up with Mckenzie Brayley and won silver in the U18 doubles match against Quebec and Saskatchewan.

Up and coming 10 year old Naman Gaurie surprised many competitors by his skill and determination to win.  In a round robin play for the U10 Junior National title, Naman defeated 2 competitors from British Columbia, one from Quebec, and one from Alberta to win gold.