Home
|
Cliff's Blog
|
Where could we take the future of U.S. racquetball? Bolivia is a great place to start
March 8, 2015 Jen

I recently made a trip to Bolivia mainly to work with Maria Vargas and some of their other promising juniors. The first thing I noticed after my 18 hour trek is how famous Maria is there. She’s plastered on billboards in high traffic areas. She’s on the most popular TV and radio stations during all hours of the day & night with great frequency and she’s recognized everywhere she goes. 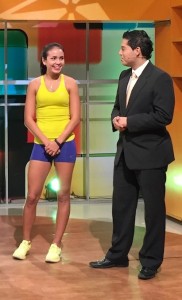 She’s very charming and well-spoken when the camera lights are on (less so when we’re doing the on court drills but I can relate to that).

Maria is not the only reason that racquetball is the 2nd most popular sport in Bolivia. First of all, there’s not as much competition as there is in the U.S. In Bolivia, it’s all about soccer. Second, there are many public and private courts. Some exclusive and fairly expensive, especially considering the average salary there is $500 per month. I played and practiced daily with Maria at Los Tajibos, the 5-star Santa Cruz hotel that hosted me. What a beautiful place! I also played and taught at an open air facility that is amazing and FREE (I did a brief video tour for you to see its features). It’s owned by the government and recently hosted the International Racquetball Federation’s World Junior Racquetball Championships. There are two stadium courts that seat thousands and six back wall glass courts with lots of room for portable bleachers.

I recently wrote an article giving my opinion on how great outdoor racquetball is and its importance to the growth of the sport. If we could ever figure a way to build facilities like this in the U.S. I’m positive the participation numbers would grow in leaps and bounds. I believe a huge part of the success of tennis and basketball stems from the fact that just about anybody can walk out their front door and find a place to shoot hoops or play a little tennis with little effort and no cost. Easier said than done, I realize, but we need a combination of improvements to get the game heading back in the right direction.

Maybe the video tour will give someone with the desire and know how to get just one of these places built. From there, who knows. Let me know what you think.