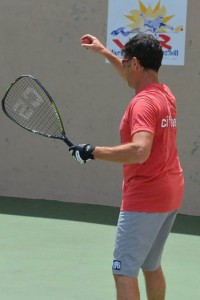 Outdoor racquetball is free.  The atmosphere is more like a party or a day at the beach.  In order for the sport of racquetball to survive and thrive again, in my opinion, outdoor racquetball & the portable court give us the best chance.  The sport is bleeding and good things need to happen ASAP…

I’m definitely partial to the indoor game for singles and to me there’s no better high than winning an IRT racquetball event but recently I had one of my favorite racquetball weekends ever. Since the first time my partner & I won The CPRT division (a bunch of years ago) of The W.O.R. Nationals I’ve had a burning desire to win both the CPRT & the regular pro division in the same weekend & this year it happened. Craig (Clubber) Lane & I won our 5th or 6th CPRT title & this year I teamed up with one of my best friends, Josh Tucker & we got it done.  After too many failed attempts in the pros (2 w/ Jason Mannino, 1 w/ Chris Crowther, 1 w/ Daniel DeLarosa, 1 w/ Nick Montalbano, 1 with Mike Green) Josh & I got the best of legend Bret Harnett & Rick-SODA MAN in the first round.  Those guys both know what they’re doing outdoors and not for a second did I take them lightly.  Then in round two we played two solid & hungry IRT pros, Markie Rojas & Jose Diaz. We beat them in two but it wasn’t easy at all. Any outdoor win would always have an asterisk if you don’t beat the best & Rocky Carson is definitely the best outdoor player right now so I was VERY happy to see that he and IRT #3 and likely #1 some day were our next opponents. Josh & I beat them in 2 tough games & I was elated.  On the other side of the draw Scott Davis & my CPRT partner were ripping through people. Scott & Clubber beat Daniel & I in Vegas outdoor the previous year so I knew we more than had our hands full. By the way, I would easily put Scott Davis in the top 5 most all around skilled players of ALL TIME. Indoor & outdoor.  In the finals Josh & I both had one of those days. Usually it’s one player on the winning team that is having the great day & the other is just solid or stays out of the way but not on this day. We both had days that I’ll not forget. I’d say we had 2-3 errors in the match & everything else went just right. Combine that with the fact that Scott & Clubber had the opposite kind of days & thus the results.  The scores were not at all an accurate reflection of how great those guys are.

So at this tournament it really dawned on me how vital it is for this part of the sport to flourish. There are two big advantages that sports like tennis, basketball, baseball, surfing etc. have over racquetball.  The first is that it’s free to go play casually.  In most sports this is where & how kids start & it’s where the best pros are spawned. This is more important than ever as two chains of clubs are completely taking over.  LA FITNESS & LIFE TIME FITNESS are building lots of courts thankfully. Unfortunately LA FITNESS doesn’t allow anybody in until they’re 18 so that squashes any hopes of junior play. LIFE TIME FITNESS really embraces tournaments, league play, teaching, junior play, shoot outs & they host The US OPEN, racquetballs premier event. They have over 100 amazing facilities but not everybody has access to them.  The second big advantage that outdoor sports have, and this one is very under valued in my opinion is is filming and photography. In this day quality photos & quality TV production is essential for a sports growth.  The pictures that are taken in Huntington Beach, The Florida Beach Bash, The 3WALL BALL event in Vegas & any time The IRT has the portable court outdoors are superior & that really helps the games image.

So I really believe that all factions of the sport must embrace, help promote outdoor tournaments & find a way to get new kids to the outdoor racquetball courts & BUILD MORE OF THEM.

Last weekend I played another CPRT tournament outdoor tournament with my good friend, Tom Moore at The W.O.R., Belle Isle championships.  The great diving gets of Greg Lewerenz & his partner Jim Bronson were too tough!!!  As you can tell from the picture at the bottom that it was a blast so thank you to Darryl Hunter & staff for putting on this event. Tons of hard work & it’s greatly appreciated by me.

Next up for me in the world of outdoor racquetball is The 3Wall BALL CHAMPIONSHIPS in Las Vegas September 12-14. I’m teaming up with Clubber again in the CPRT division and Josh Tucker is taking the weekend off of saving lives in the O.R. to come take on the worlds best again. The tournament is held at The Stratosphere so it’s an easy commute for all of the players.  Down the Stratosphere elevator & you’re there!!!  I highly recommend this as a tournament/vacation for couples and groups of party people as the tourney is right on the strip so it’s not far to great shows, dinners & all the mischief you could ask for.

Then in March I’ll be playing with another great friend, Vic Leifbosky, at my wife’s favorite racquetball tournament, THE FLORIDA BEACH BASH. This one is right ON Hollywood Beach in Fort Lauderdale. Numerous hotels in waking distance make this one a super easy tournament. No car rental needed.

Another great thing about outdoor ball is that if your buddy or spouse likes your company but doesn’t like hanging out inside a gym all weekend like us racquetball addicts will do they can bring a beach chair, grab a drink, sit in the sun and watch… Less painful for them & maybe the next year they’ll want in on the action!  And then maybe the bleeding will stop…